eN arts is pleased to present the third edition of “showcase” curated by Professor Minoru Shimizu, one of Japan’s most respected contemporary art critics. “Showcase” is a group exhibition focused on photography and itself has truly been a showcase for up and coming photographers since 2012. For “showcase #3”, Professor Shimizu has selected, from the perspective of “portraits”, three talented photographers, Yosuke Harada, Ryuichi Ishikawa, Shinichiro Uchikura. I hope the distinctive portraits photographed by these promising artists will fascinate the audience.
Naomi Rowe | eN arts

showcase #3 “Japanese Portraits”
Few young artists photograph portraits today. There are some, but for ordinary artists, portraits are little more than the exposure of the subject’s identity (“Ah, this shows Mr. A’s personality very well.”), an exploration the subject’s identity (“Oh, we can see the new side of Mr. A”), or an expression of humanism (“Wow, we sense human dignity through Mr. A”)

In contrast, the few distinguished portrait-photographers focus on “sameness” not “identity”. The difference is “identity” concerns the subject (“I” am “me”, not “you”!) while “same” in “sameness” concerns the predicate state (Being naked, or being sick, or dying, we are the same. You and I are the same because we both are male or are female. You and I are the same because we defecate or can become sexually excited.) Thus, the sameness exists without the framework of the identity of the individual. “Sameness” is scandalous in a way by crossing the individuals’ borders. Now that we understand the definitions of “sameness” and “identity” in portrait photographs, portraits can cause discomfort (Don’t make Me like You) and touch taboo areas (the father looks at his daughter as a woman.).

We are in the same predicate state in that we are Japanese and living in Japan. But since the 3.11 Earthquake, we have become more sensitive and less comfortable being the same as others. We have begun to inquire the meaning and conditions of being the same. In the very reactive Japanese society today, we fear that the identity politics of “The Japanese” and “Japan” are taking over the sameness of “being Japanese” and “living in Japan”.

For “showcase #3” I have selected the photos of three photographers who capture the sameness in “being Japanese” and “living in Japan” today. 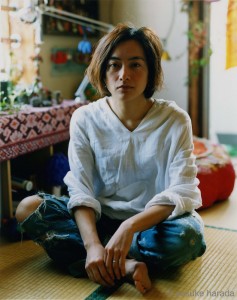 Yosuke Harada (1982-) Harada was awarded the Grand Prix Prize in “Canon New Cosmos of Photography” in 2012. His portraits are the ones of people he meets in his daily life… nothing special, no history, no staging — nothing but very ordinary life. Harada takes portraits of people who are not friends but also not total strangers by using his unique sense of distance and exquisite space in order to capture the density of existence only recognized when existence disappears, such as death, illness, and relocations. 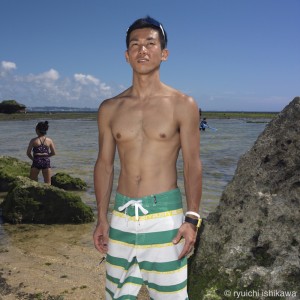 Ryuichi Ishikawa (1984-) Ishikawa won an honorable mention award at “Canon New Cosmos of Photography” in 2012 (recommended by Minoru Shimizu). In his works “Okinawan Portraits,” Ishikawa keeps his eyes on the people living in Okinawa, a place that has the layer upon layer of history and is called “The Land of the Ocean”. Multiple and contradictive characters – “violent and sexy”, “poor and gorgeous”, “yakuza-like and serious”, “desperate and optimistic” – collide in each portrait. 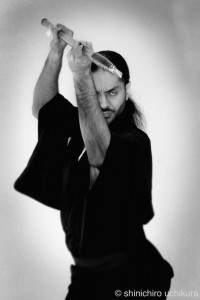 Shinichiro Uchikura (1981-) Uchikura won an honorable mention award at “Canon New Cosmos of Photography” in 2013 (recommended by Noi Sawaragi), in 2011 (recommended by Katsumi Omori), and 2010 (recommended by Minoru Shimizu). He erases the identity of the object, and interprets photography dramatically through his aesthetic senses. His portraits are straightforward paradoxically because his interpretations truly overcome the reality in his photos.