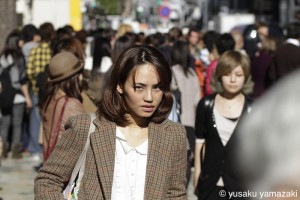 showcase #4 – constructs-
In contast to “showcase #3″ presenting Japanese Portraits, the theme of “showcase #4″ is a photographic style set in contrast to the realism of photography.  As a matter of course, the dualisms — “pictorial or direct?” or “direct or realism” — were the presupposition, in addition, the efficacy of “straight” and “realism” as a competitiveness was believed.  “showcase #4″ is “constructs”.  The genre called “constructed photography”.

Daisuke Nakashima (b. 1983) was awarded Semi Grand-Prix in “New Cosmos of Photography” in 2007, and Grand-Prix in “Visual Arts Photo Award” in 2008.  In the same year “each other” (Seigensha/Kyoto) was publised, marking his career debut in photography.  His capacity to construct an imperturbably “cool” composition, without undue focus, and to divide and re-connect the object, somehow is an innate ability.  His photographs are truly “constructed photography,” framing objects and selecting the light so that they are completed without any image processing.

Yusaku Yamazaki (b. 1984) was awarded an Honorable Mention Award (selecting judge: Minoru Shimizu) in “New Cosmos of Photography” in 2013, and in the same year was awarded an Encouraging Prize (selecting judge: Hiromi Tsuchida) in the “1_WALL Phography Competition,” and in 2014 he was awarded the Excellence Award for “New Cosmos of Photography.”  Now his photographs are drawing attention from both critics and the general public.  With his works, the basis of viewing a photograph is subverted by his advnced imaging processing techniques, techniques that few people notice.  As a result of these techniques, his works eliminate the obvious from the photograph itself and the act of viewing.

How two different approaches, “naturalism” and “technicialism” work to construct photographs that calmly shake the various premise of taking photographs and viewing them, with a touch of humor.
Minoru Shimizu