In Japan, salt has been used for purification in many circumstances since ancient times. Motoi Yamamoto is an artist creating works using salt. Recognition of “Motoi Yamamoto – Salt Artist” has been established around the world from his large-scale installations, not only in Japan, but also in Europe and the North America. At the end of each exhibition, the installation is disassembled, with the salt gathered by site patrons taken and returned to the ocean in an artistic project “return to the sea”.

Eleven years have passed since the “FLOATING GARDEN” held during the cherry blossom season in April 2010.   This year, in the beautiful autumn leaves season, Motoi Yamamoto’s latest works and installations will be displayed at Maruyama Park in Gion, Kyoto. All of us at eN arts are extremely happy to have this special opportunity for you.   We do so hope that the installations and works, under the beautiful Japanese maples at our entrance, will give us the feeling the worse of the COVID epidemic is behind us.

Although Japan’s COVID-related state of emergency has been lifted, we will continue to welcome guest and ask their cooperation in measures to prevent the spread of infectious diseases. We apologize for any inconvenience caused by wearing masks, disinfecting hands, limiting the number of visitors, etc., but we appreciate your understanding and cooperation.

【Why do I draw a labyrinth】
The maze-like pattern entitled “Labyrinth” is an artwork that I’ve been drawing for over 20 years.
I have been drawing the patterns with salt and paint, hoping that I may be able to reconnect with the memories of the loved ones in my life. There are times I may or may not be able to draw these intricately intertwined paths as I had hoped because of various conditions, but I keep drawing while accepting everything that goes on around the installation.
“Labyrinth” is a result of certainty and uncertainty, a result of pursuing memories and the steps along the way.

【Labyrinth and maze】
Labyrinth and maze are words that originate from different contexts but in modern times they are often confused and vaguely distinguished from one another. A labyrinth is a path with no additional paths that branch out, thus you can get to the end without getting lost on the way. A maze refers to a game that aims to confuse you as you try to get to the exit through complex paths.
At first glance, the patterns I draw may look like a maze, but I am not drawing it for the purpose of getting lost. Rather, it is a path with the hope that it would connect us back to memories, just like a labyrinth with a single path to follow to the end. I chose the title “Labyrinth” as my prayer of hope.

Motoi Yamamoto
Born in Onomichi, Hiroshima in 1966. Graduated from Kanazawa College of Art in 1995. Currently living in Kanazawa, Ishikawa.
I create installations using salt to evoke cleansing and purification. It takes me anywhere from a few days to multiple weeks to draw these huge patterns on the floor by myself. Furthermore, on the last day of an exhibition, I work together with the viewers to destroy the work and return the salt to the sea. I also produce detailed acrylic and pencil works. In recent years, I have worked very actively on collaborations with companies. I have presented his works in numerous locations both at home and abroad, including at the MoMA PS1 Museum of Modern Art in New York, The Hermitage State Museum, Museum of Contemporary Art Tokyo, Hakone Open-Air Museum, 21st Century Museum of Contemporary Art Kanazawa, Setouchi Triennale, and via a traveling solo exhibition in the United States.

Main Concept
The mainspring of my work derived from the death of my sister at a young age and I have been creating artwork so that memories with loved ones won’t fade. And, my wife passed away with breast cancer, leaving our little daughter behind, now I am living in memories with her as a family.
Finding out about the illness, staying in the hospital, recurrence of cancer, taking care of her at home, and her death. Sadness from a life that existed in my life suddenly disappearing. Reality that I will never see her again. I have put all these struggles into shape as if I was writing a journal entry.
My work is represented by large-scale labyrinths and patterns of swirls drawn on floor surface with salt, and one recurring theme for all works is my thoughts for the loved ones who passed away as well as my strong desire to hold on to the memories with them.
Even the dearest memories fade with time, but I refuse that to happen. Creating artwork to me is an attempt to weave these uncertain memories to resist letting go of all the memories from the past.

Installation Works
Salt – Salt has been an essential part of human lives worldwide. Especially in Japan, salt is a sacred substance used for funerals. I have been using salt for my installation for nearly 25 years since my sister passed away due to malignant tumor in 1994. In order to accept her death, I tried to experience how death is received in Japanese society by using various materials for my artwork, and I chose salt as the main material when I created a piece of artwork with a theme of funeral. This was because in Japan, people use salt after a funeral in order to purify their spirits from the impurity of death. I am also strongly attracted to salt not only because of its cultural and historical background, but also its translucent colors as well as the ocean where it came from as the birth place of all life.
I then began to think that the salt I’m using for my artwork might have been in the ocean at one point, supporting our lives, holding the ‘memories of life’ within itself. Salt Lines – I draw all the lines by myself when I work on installation. I never erase or re-draw the lines. We all live in a real world where life cannot be undone or rewind. Lines I draw reflect myself who is alive in this moment. When the lines are not perfect, I would only add lines to modify it. Through accepting every occurrence, relationship between me and the installation is to be constructed. This is what I impose on myself.

Labyrinth
Drawing a labyrinth with salt is like following a trace of my memory. Memories seem to change and vanish as time goes by. However, what I sought for was the way in which I could touch a precious moment in my memories which cannot be attained through pictures or writings. What I look for at the end of the act of drawing could be a feeling of touching a precious memory. During the course of drawing, I cannot tell it if will reach the essential point till its very end because lines are curved or cut against my intention. It depends not only on my psychological or physical condition, but also on the condition of the floor or the level of humidity. I always silently follow the trace, that is controlled as well as uncontrolled from the start point after I have completed it.

Floating Garden
The series of works with swirling lines named “Floating Garden” is similar to lacework, an act of slowly rediscovering pieces of memories tucked quietly in the drawers in my mind, and weaving them together. I draw countless tiny cells (bubble-like patterns) with salt or paint and these cells symbolize pieces of memories and fragments of small daily events that I and my wife and my sister shared.

Swirl – I have been drawing swirls and labyrinths (patterns with lines that intertwine like a maze).
Such patterns have been used as symbols to represent rebirth. Swirls symbolize life and death, resurrection, and rebirth showing a strong vitality and eternity mainly in East Asia. Labyrinths symbolize almost exactly the same aspects in the West, originated from Scotland and Greece.

Utsusemi
The stairs which broke off – The work expresses “sentiment to the dead younger sister” and “the conflict that I want to meet again, but cannot encounter”. The title “Utsu-semi” has two directly opposed meaning. This word was used by an archaic word long ago. The original meaning is “this world”, “life” or “now human being who lives”. However, the words is including an opposite meaning now. The meaning is “a cast-off shell of the cicadas” or “Emptiness”. 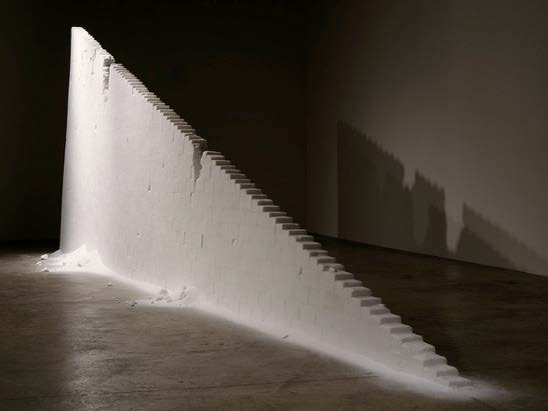 Return to the Sea, project
In the project, salt used for installation work will be returned to the sea by the hands of people who agree with the concept. On the last day of exhibition, audience breaks the salt work by hand, collect salt, and release it back to the sea. 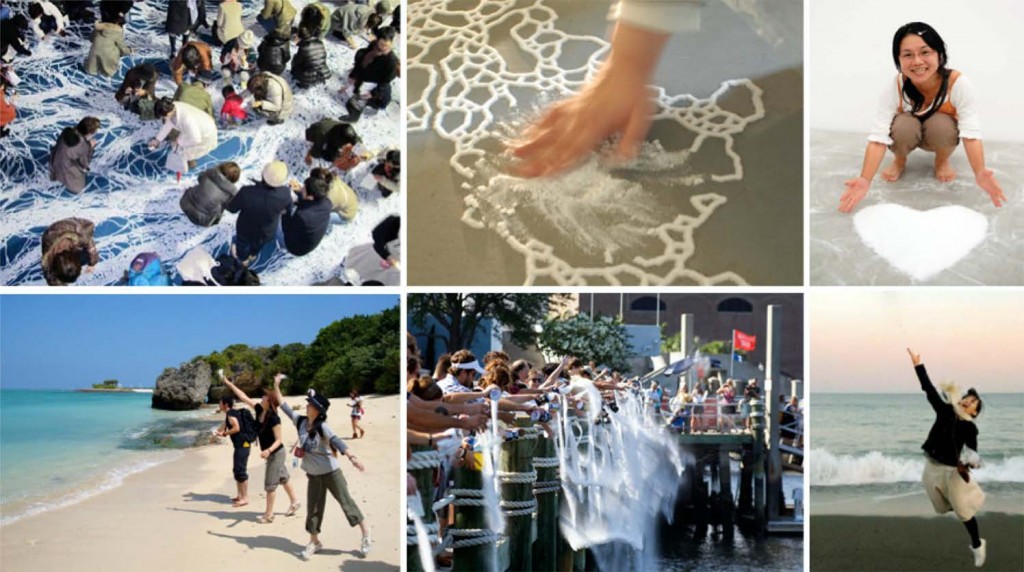