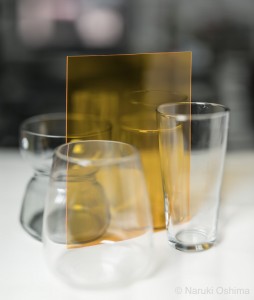 Since participating in the Artist in Residence Program `ARTEX` in Dusseldorf, Germany in 2000 and studing under Thomas Ruff at the Kunstakademie Dusseldorf, Oshima has become a globally recognized artist. He exhibited in the “International Architecture Biennale, Rotterdam” (2003) and in the photography section “Morphing Lights, Floating Shadows” of the Italian Pavilion at the 9th Venice Biennale (2004). Oshima now lives and teaches at Tama Art University while working in Tokyo.

Oshima’s main series of works are titled “layer colored”, “scene, light, color”, “reflections” and “haptic green.” One of defining characteristic of his works is that he photographs hundreds of shots of the same object(s) at different focal points and then assembles a subset of these to create transparent layers that form a work that while looking just like an original photograph is instead completely different. In other words, his work is a like a completed jig-saw puzzle, with each piece from a different perspective. So, for us, the viewers, it looks like an ordinary shot of a landscape or a group of objects at the first glance, but then we realize that there is something odd about the photography. With our eyes taken by this unique visual experience, we wonder why and have to focus on looking, observing, and analyzing to understand what we are seeing. In one sense, Oshima proves that “seeing is not believing.” We can only derive a true visual comprehension of the work by careful observation and analysis, not using the vision we enjoy in the daily life.

This year we participate again in Nuit Blanche Kyoto 2019, so eN arts will be open until 9:00 pm on October 5th Saturday. I hope you will enjoy “Still Life on a Table” by Naruki Oshima.

The Neutral:   Still Life on a Table

Nothing more than a visual artifact, a photo is a targeted world image projected onto a screen after having been captured by a monocular lens. In other words, the screen is a plane cut from a four-sided pyramid formed by the field of view directed at the subject from a single point. The plane then becomes a photograph or a painting. This method allows the world to become a representation that deeply involves our ordinary perceptions. I, however, sensing the limits of such conditions, feel constrained as a result, and question how photography should reference the photographic equipment in order to be liberated from it. This limit has become this core of my art.

As an example, I view a photographic image, a reflection of the glass façade, as a motif divided into multiple layers (akin to multiplexing of many screens) so that the space is confused, creating ambiguity/multiplicity in the unified screen. Alternatively, I have been trying to disrupt the single-view perspective by integrating hundreds of photos, formed by zooming in on parts of the subject, and are combined into a single shot (thereby creating viewpoint ambiguity/multiplicity) that distorts one’s senses.

In my new series, “The Neutral: Still Life on a Table,” this effect is produced using a stitching technique that integrates multiple shots. By applying this technique, it is possible to set the focus at various points of a scene, so that the multiple focal points appear to layer surfaces. As a result, the cut surface of the four-sided pyramid is represented in the tabletop landscape and forms an object, or so it is viewed. In other words, by moving away from a stable space set through a monocular lens and creating an “interface” between the layer surface generated by multiple focal points and the other spatial areas, a static photographic space is no longer static.

Thus, the still life on the table is transformed into something that is difficult to specify, evoking touch, color and shape. Rough, smooth, and slim surfaces. Gaseous or non-material colors, apart from the intrinsic color attributed of the object. “Shape” that has lost its sense of volume and depth. Still life now appears as an abstract phenomenon. The aim of this new series is to present the state of things as a “neutral reality” that is difficult to be specified apart from the context of meanings.